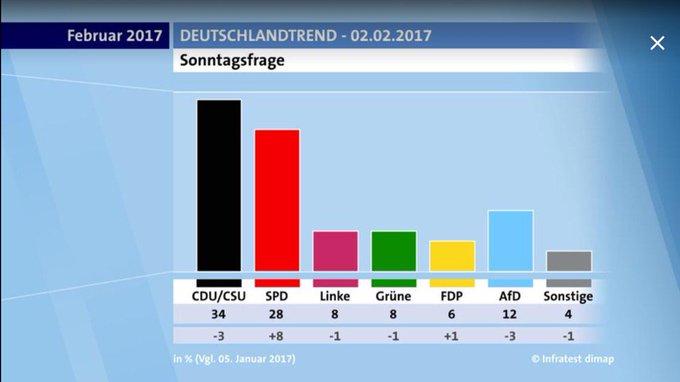 Germany’s Social Democrats (SPD) polled 31 per cent in a survey on Wednesday, benefiting from a surge in support since nominating Martin Schulz as leader and narrowing the gap to Chancellor Angela Merkel’s conservatives.

The poll for Stern magazine and broadcaster RTL, published just over seven months before federal elections, was the first by the Forsa institute to give the SPD above 30 per cent since October 2012.

Merkel’s conservative bloc, made up of her Christian Democrats (CDU) and their Bavarian sister party the Christian Social Union (CSU), lost 1 percentage point to 34 per cent.

The SPD gained 5 points from the previous Forsa survey.

The poll showed as many Germans would vote for Schulz, who was previously European Parliament president, as for Merkel if there were a direct vote for chancellor, with both on 37 per cent.

The SPD, Merkel’s junior coalition partner, has been trailing the conservatives for years in opinion polls and last won an election under Gerhard Schroeder in 2002.

On Monday a different poll showed the SPD would beat Merkel’s conservatives had an election been held that day.

But Forsa head Manfred Guellner said: “We’re not yet seeing such a decisive mood for change as we did in 1998 when Gerhard Schroeder was able to score points due to widespread weariness after 16 years of Helmut Kohl,” he said.

Schroeder was German chancellor from 1998 to 2005, replacing the CDU’s Helmut Kohl, who was elected West German Chancellor in 1982 and remained leader of a reunified country until 1998.

The Forsa poll put the anti-immigrant Alternative for Germany (AfD) in third place on 10 per cent while the Greens and the far-left Linke were on 8 per cent each.

The federal election is due on 24 September and Merkel reiterated on Tuesday that it would be the “toughest that I have ever experienced”.

The poll of 2,501 people was conducted between 30 January and 3 February.